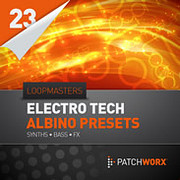 Loopmasters has released Electro Tech Albino Presets, a new title in the Patchworx series of soundsets.

Patchworx 023 – Electro Tech for Rob Papen’s Albino, is a collection of Electro Bass, FX and Synths exclusively created by Meat Katie, one of the most respected producers in the Tech Funk scene right now.

Mark Pember (AKA Meat Katie) has had a long history in Dance music. In his time he has recorded for such prestigious labels such as Wall of Sound, R&S Records , Kingsize, Bedrock, Perfecto, Great Stuff, Renaissance, Saw Pember has also remixed for / collaborated with Arthur Baker, U.N.K.L.E, Deep Dish, D.Ramirez, Peace Division, Chicken Lips, Robbie Rivera & James Zabelia, to name but a few.In detail producers should expect to find here a great selection of patches which are designed to complement Drum & Bass and Dubstep productions, but will of course work well for other styles also.

The 64 Massive Patches included in this pack are comprised of 30 Lead Basses, 8 FX Presets, 26 Lead Synths – and 64 MIDI Files.

The Electro Tech Albino Presets pack is available to purchase for £14.95 GBP.