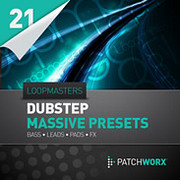 Dr Hobo (aka Tom Stocks) is a professional sound designer, specialising in dark bassline synthesis for Dubstep and Drum and Bass, using Native Instrument’s seminal synthesiser, Massive. He has sold patches to some of the most prominent producers in the dubstep genre, as well some of the prodigious pioneers of dance music itself.

The 65 Massive Dubstep Patches included in this pack are comprised of 47 Tearing Dubstep Basses, 5 Dub FX, 4 Dubstep Leads, 2 Pads, plus 7 Rises and Sweeps.

Dubstep Massive Presets is available to purchase for £14.95 GBP.