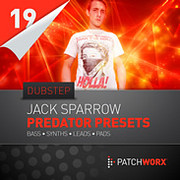 Jack Sparrow in a Leeds based producer with deep, dynamic, and diverse releases on Senseless Records, Contagious, Earwax, Pushing Red Recordings, Cloqwerq and Pinch’s Tectonic label to date. He has also recently been involved in dubstep remix projects for a variety of artists including Skepta (3 Beat Records), Count and Sinden, and his highly anticipated debut album was released to glowing reviews internationally.

Jack has gone to town with this orginal collection of Dubstep sounds and samples for modern producers looking for the current sound of the Dubstep progression. Dark FX and Atmospheres blend with Heavy Bass Riffs, Tangled Arpeggios and Sub Bass Frequencies. This patch collection has a grat variety of Dark and Techy Sounds which producers of Dubstep, Grime, DnB and Downtempo will enjoy.

Jack Sparrow Dubstep for Predator is available to purchase for £14.95 GBP.