Award-winning Paul Cocksedge Studio has launched a Kickstarter project for The Vamp Stereo and The Vamp Speaker, two new revolutionary products that aim to bring back great sound to old speakers. 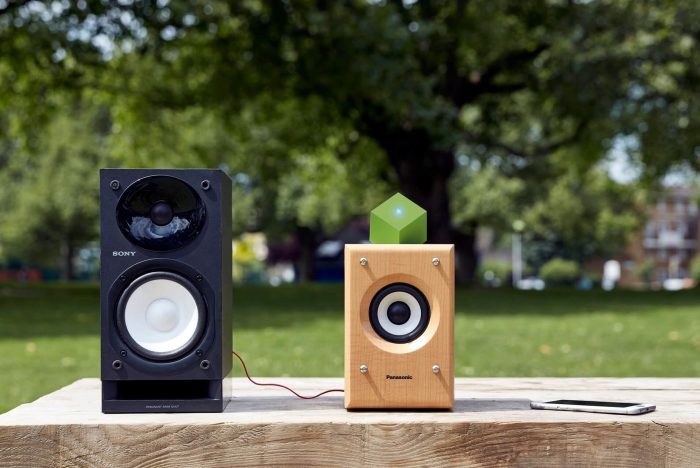 The effort began with the hugely successful Kickstarter campaign in 2013 for The Vamp – a multi awardwinning audio device that transforms any old speaker into a great-sounding portable Bluetooth speaker.

The Vamp is a cleanly designed cube shaped device with an inner magnet that allows it to stick to the side of a speaker. The internal battery can power any size speaker for over 10 hours, which means no wires or clutter. The Vamp can also receive sound by connecting to any Bluetooth device within 10m. With The Vamp, the old supports the new, which helps to bring life back to millions of existing speakers, producing incredible sound at an affordable price.

Using feedback from their Kickstarter backers and more than 10,000 units sold worldwide, the team behind Paul Cocksedge Studio just created The Vamp Stereo, which has the same functionalities as
The Vamp but with more muscle. It can now be hooked up to two speakers for stereo sound and produces two times the sound.

The second product, The Vamp Speaker, is for all of those who loved the idea of The Vamp, but did not have their own speaker to connect it to. The Vamp Speaker has been made to work perfectly with The Vamp Stereo in both its aesthetic and function – all while lessening electronic waste. The speaker’s box is made out of a sustainable OSB board and the electronic components are made out of recycled materials. It can also be connected to up to two additional speakers, allowing for louder and deeper sound configurations, stereo separation, and provides even more incentive for backers to save a speaker.

The two devices continue to propel the studio’s efforts to prevent electronic waste and raise awareness around this global issue. In 2014 the studio launched the #SaveASpeaker campaign, where they offered hand-picked speakers to anyone who ordered The Vamp through their website saving more than 3,000 speakers from a recycling centre in total.

“When we learnt that 10,000 speakers a month are sent to one recycling centre alone, we were inspired and knew we had to continue the journey and go further with The Vamp. We listened to our customers who wanted it to be louder and have stereo sound. They also told us that many of them didn’t have old speakers, which is why we designed The Vamp Speaker. The sustainable aspect has kept the speaker on-message with the spirit of The Vamp, which is reusing and recycling. But the story doesn’t end with The Vamp Speaker. It’s the beginning. This sentiment of reusing is explored further with the simple connector in the back, which allows you to add more speakers. If you have old speakers or find them on the street or at the market, you can bring back the sound to these beautiful speakers that were built for great sound,” says Cocksedge.

Kickstarter backers can get various rewards in return for their donation.