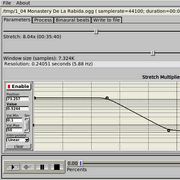 It is suitable only for extreme sound stretching of the audio (like 50x) and for applying special effects by “spectral smoothing” the sounds. It can transform any sound/music to a texture.

Paulstretch is open source software released under a General Public License (GPL2). A Windows binary is available to download.