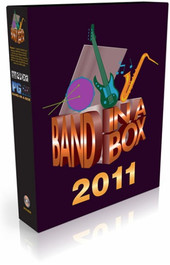 PG Music has announced the release of Band-in-a-Box 2011 for Macintosh.

Band-in-a-Box 2011 for Macintosh is here, with over 50 new features and enhancements! We′ve made big improvements to the sounds of the RealTracks, so that they sound more natural over a much wider range of tempos with the élastique Pro V2 time stretching engine by zplane.development; not only do they sound better, the audio fidelity is improved, and RealTracks are now smaller – you can even shrink the size of your existing RealTracks, and more…

Band-in-a-Box 2011 for Mac is now available to purchase. There is special pricing on most First-time and Upgrade packages, and when you order before May 15, 2011 you’ll receive a Bonus 10-PAK of software and Add-ons absolutely free.