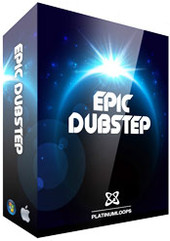 Turn up the sub and hang on to your fillings – it’s gonna get LOUD! Epic Dubstep boasts some of the most trouser flapping, floor shaking and downright mind melting bass riffs ever conceived. These grooves are so devastating they should carry a government health warning. We’ve also injected these massive dubstep anthems with a strong dose of melody in the form of euphoric synths and cinematic strings. Trance gates, super hot lead lines and crushing drum grooves all build intense atmosphere until some of the most brutal bass riffs kick in and crush the competition. When these bad boys drop drop it’s all over.

With 10 song construction kits Epic Dubstep features 140 loops of pristine 24 bit audio quality in WAV, Apple Loops and Rex2 formats and weighs in at a humongous 1.35 Gig. As if that wasn’t enough we’ve also included the full MIDI arrangements so that you get total control over the mix, sequences and compositions. Just load the MIDI files into your DAW, throw the audio loops on some tracks and your now in full control of your mix. You also get fully mixed audio examples of each beat to guide you in your quest for the sonic bass domination of planet earth. Seriously though, you’re gonna need to nail things down if you play this demo at the proper volume – CRANKED! Tempos are all 140 bpm.

Epic Dubstep is available to purchase for $79.95 USD.

Use Easter Sale code bunny to get 50% off your order for the next 2 days.