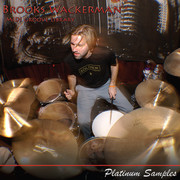 Born into a family of drummers, Brooks Wackerman was predestined to become the drumming powerhouse he is today. Tutored by his father Chuck Wackerman in the Los Alamitos High School jazz band and in middle school he learned to play at a very young age. The youngest brother of drummers Chad (Frank Zappa) and John, Brooks began studying drumming at age 7 with Chuck Flores and Murray Spivak.

The Brooks Wackerman MIDI Library was recorded over a two-day session on a Yamaha DTX900 electronic drum set.

The Brooks Wackerman MIDI Groove Library is available to purchase for $60 USD. The Grooves library is sold separately for $40 USD; the Songs Library for $35 USD.