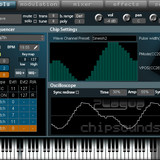 The most advanced 8-bit sound chip emulator is doing even more to save endangered sound chip species!

In addition to having a totally new Interface and improved sound authenticity, Plogue is saving 3 new sound chips from extinction and adds many additional features.

Chipsounds is available to purchase an instrument plug-in for PC and Mac (VST/AU/RTAS) for $95 USD.