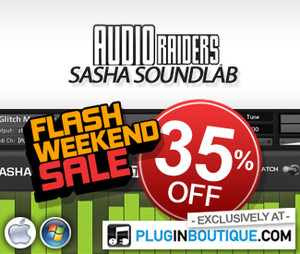 Plugin Boutique has launched a sale on Sasha Soundlab, an instrument library by AudioRaiders.

AudioRaiders has invaded Sasha’s studio to bring you the first collection of software instruments and sample libraries that truly capture his sound.

If you’ve ever had an epic club night – one of those evenings you stayed out until the sun was rising and woke up feeling alive like never before – then you’ve likely already heard a Sasha track. His music has touched and inspired two generations of dance music fans. Now, you can use his sounds and techniques for your productions.

Any successful producer will tell you that you’ll never create a chart-topping song by simply layering stock samples on top of each other. You need to customize and create your own style. That’s exactly what Sasha Soundlab lets you do.

Sasha Soundlab is available from Plugin Boutique at a 35% discount until October 20th, 2014.