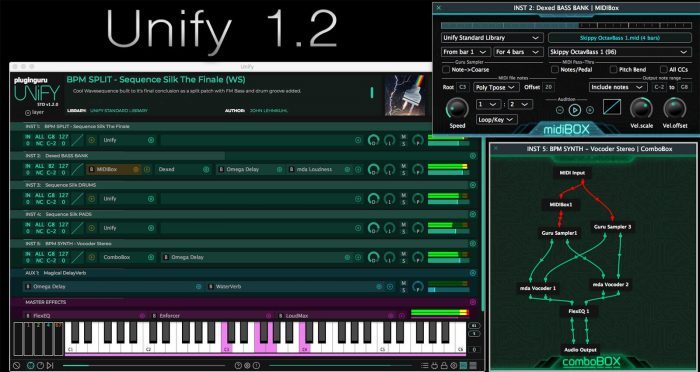 Unify version 1.2 adds ComboBox, a new Multi-Effect PlugIn along with updates to many plugins previously included in Unify, offering its users the ability to create sounds with Wavesequencing, Vocoding and more. In addition, ResonantDSP.com’s Swanky Amp Guitar Amp Simulator effect has been included.

“Unify is a Multi-Effect host and software instrument that ships with 537 patches and can integrate all of your MIDI Effects, Instruments and Audio Effects in a very easy to use environment.

By adding ComboBox, Vocoding and complex MIDI sequence abilities are now available. By updating MIDIBox and PolyBox, we’re now able to explore rhythmic Wavesequencing in a totally new way where any of your plugins and audio effects can be used for making Wavesequence Patches. Also, the timing of the Wavesequence playback is controlled by a MIDI File that our customers can create.

This flexibility has never been available for making rhythmic Wavesequencing and we can’t wait to hear where our customers go with this ability!”

Version 1.2 is a free upgrade to all registered owners of Unify.