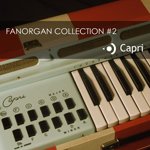 Precisionsound are happy to present this rare little Swedish fan organ. It´s probably made in the 50´s and sounds as nice as it looks! The tone character is harmonium style, very distinct.

The original instrument is a little slow in it´s attack, so we enclosure a complementary, modified version with faster attack. Other improvements in this sample set is extended range of the melody keys and a complete set of chords (minor and major), from C to B.

All formats are included when you buy the SampleSet so you can choose to download both the 24bit Kontakt/HALion programs and the SoundFont (16bit) version if you like now or later on.