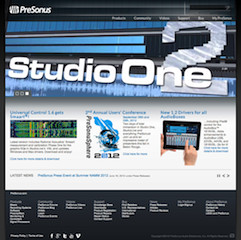 Notes PreSonus Associate Creative Director Cave Daughdrill, “Truth is, a lot of us hated the old site. Working on it was worse than being stuck in traffic during the flaming-hot Louisiana summer. And it was starting to look old and dense-like the Gulf after BP got through with it. We’ve always made the kind of gear we want to use ourselves, so we decided it was time to do that with our site.

Now, it’s fast and easy to find things, and the site is much more visual. The video display is huge, and you can even search and filter for results while playing the video. And the site works great with mobile devices. We think people are really gonna dig it.”

“From a back-end standpoint, the old PreSonus site was the organizational equivalent of a dozen meth’ed-up gerbils playing soccer with a marble inside a grandfather clock,” says PreSonus Web Engineer Luciano Ziegler. “Our new site is so smooth that it may actually revolutionize String Theory.”

discoDSP updates Corona to R4.3 + 30% off through July