EarMix 16M is designed to work seamlessly with the PreSonus StudioLive Series III family of mixers, and is compatible with other AVB-enabled systems as well. 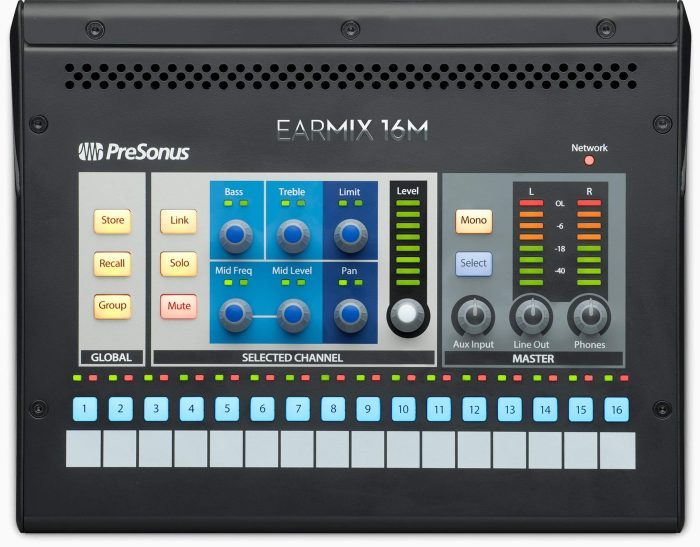 Part of PreSonus’ fast-growing ecosystem of AVB-networked products, each EarMix 16M accepts 16 mono channels of input via AVB networking—and you can network multiple units with a StudioLive Series III mixer.

EarMix 16M features a loud, clear headphone amplifier that can drive low-impedance devices such as professional-caliber in-ear-monitors. Channel grouping and stereo channel linking let you create custom mixes for each musician, and you can apply limiting and three-band EQ with sweepable midrange frequency to each channel, as well as to the main mix. Once you’ve perfected a set of monitor mixes, save the whole scene to internal memory; you can store and recall up to 16 mix scenes locally.

The EarMix 16M can be powered with its included external power supply but in many cases—such as when it’s difficult to provide power across multiple onstage locations—it’s better to use Power over Ethernet (PoE), which enables network cables to carry electrical power to compatible devices.

A pair of AVB jacks enable you to chain multiple EarMix 16Ms while also connecting to a StudioLive Series III mixer. You can expand even further by chaining EarMix 16Ms from multiple PreSonus SW5E AVB switches. Once you’ve created your AVB network, setting up EarMix 16M routings from a networked StudioLive Series III console or using free PreSonus UC Surface control software for Mac, Windows, iPad, and Android is fast and easy.

EarMix 16M is expected to be available in the first quarter of 2018, with an anticipated street price of $399.95 USD.

PreSonus has also announced is has expanded its StudioLive AVB Ecosystem with NSB-series stage boxes.

Among other benefits, this eliminates the need for a heavy, expensive copper snake—and the signal degradation that goes with long analog cable runs. You can remote control the NSB series’ inputs, preamps, and phantom power from a networked Series III console or from free PreSonus UC Surface touch-control software.

A stage box is all about analog connectivity, and the NSB 16.8 and NSB 8.8 give you plenty. The 16×8 NSB 16.8 offers 16 locking combo mic/line inputs equipped with PreSonus’ remote-controlled, Class A solid-state XMAX preamps, including gain compensation for shared input scenarios. The 8×8 NSB 8.8 offers eight of these mic/line inputs. Both models provide eight outputs with locking XLR jacks. A built-in two-port AVB switch lets you daisy-chain multiple units, or use the PreSonus SW5E AVB switch to support larger shows and installations.

Even if you baby your equipment, your stage boxes are likely to take a beating, especially on extended tours. But no matter how demanding the conditions, stage box failure is not an option. So NSB-series stage boxes come in a rugged steel chassis designed to survive the rigors of the road and are equipped with sturdy handles. Their classic stage box form factors allow NSB-series stage boxes to sit well on the stage, or they can be rack mounted with an optional rack-ear kit. Both models also are compatible with stage pockets from Ace Backstage.

PreSonus NSB 16.8 and NSB 8.8 stage boxes are expected to be available in the first quarter and early second quarter of 2018 with anticipated street prices of $799.95 USD and $599.95 USD, respectively.