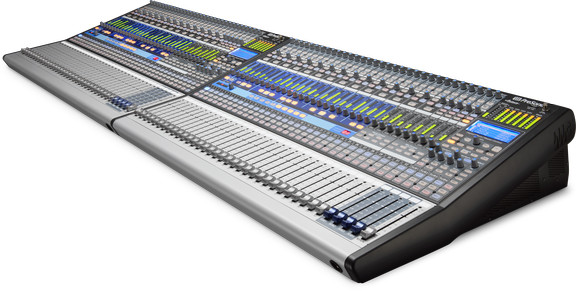 StudioLive AI Mix Systems perform as a cohesive mixer and offer a familiar, surface-driven workflow with one-to-one control over every parameter. Every channel is routed through the bus outputs of the Master mixer and every global setting is controlled from the Master to provide seamless integration between the two cascaded consoles. All the power and performance available to a single StudioLive AI mixer are available to cascaded StudioLive AI Mix Systems.

Each StudioLive AI Mix System provides a robust audio interface, making it easy to record and playback audio as well as to use your favorite plugins as inserts on any of channel. Connect each mixer to a wireless router with a standard Ethernet cable and you’re ready to remote control your StudioLive AI Mix System from an iPad or iPhone or go wireless using the included USB WiFi LAN adapters.

The StudioLive 64AI Mix System cascades two StudioLive 32.4.2AI mixers to create a 64-channel system with 80 x 66, continuously bidirectional FireWire 800 recording interface; 26 mix buses, including 8 effects buses (for 4 reverb and 4 delay processors), and a whopping 558 discrete EQ and dynamics processors. This feature-rich, 64-channel mixing system is a fraction of the size, weight, and price of a conventional large-format digital console yet offers features no console anywhere near its price class can match.

The StudioLive 48AI Mix System consists of two cascaded StudioLive 24.4.2AI mixers, giving you a 48-channel console with an onboard 64 x 50 FireWire 800 recording interface; 22 total mix buses, including 8 effects buses; and DSP processing on every channel and bus for a total of 438 EQ and dynamics processors.

Like every StudioLive AI mixer, the StudioLive 64AI and 48AI Mix System include the StudioLive Software Library. The library includes PreSonus’ Capture™ live recording software, Studio One® Artist DAW, VSL-AI with Smaart Measurement Technology™ for Mac® and Windows®, SL Remote-AI for iPad®, and QMix™-AI for iPhone®/iPod® touch, plus a free account with PreSonus’ Nimbit® online direct-to-fan marketing and distribution service.

Plugin Boutique launches Photosounder with 30% off