PreSonus has announced it is shipping the CTC-1 Pro Console Shaper, the second in its series of Mix Engine FX plugins for Studio One 3 Professional.

The new Studio One Add-on, which works with Studio One Professional 3.3.1 and later, provides three great-sounding models of classic British, vintage tube, and custom consoles and adds several major enhancements to the Mix Engine FX environment. 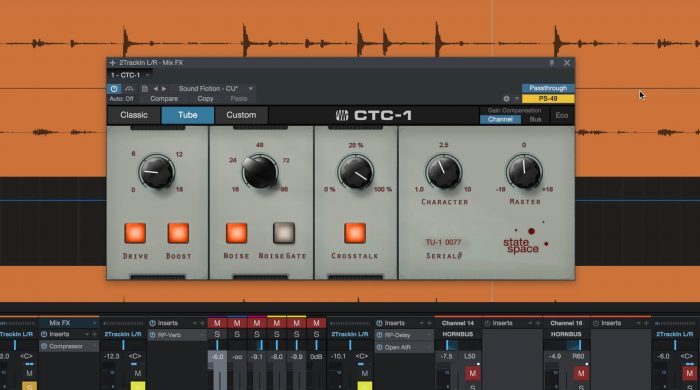 Introduced in Studio One 3.2 Professional, Mix Engine FX is a plug-in paradigm exclusive to Studio One Professional that can subtly alter or completely transform Studio One’s native mix engine. In contrast to conventional plug-ins that must be inserted independently on each channel, with limited or no interoperability, Mix Engine FX can process every channel routed through a bus, both individually at the source and at their summing point, using one plug-in. Any bus, including the main stereo bus, can have its own Mix Engine FX assigned, allowing for limitless sonic possibilities.

The Drive stage faithfully re-creates the characteristic dynamic behavior of an analog console input preamp. Increasing the Drive amount first adds subtle and beautiful harmonics to the signal, then goes into saturation or analog distortion when the amount increases above a certain level. The character and sonic quality of this effect varies significantly between each model.

Inherent signal noise is key in defining the sonic character of an analog console. The modeled analog noise in CTC-1 is unique because it’s different on every channel, which is only possible with Mix Engine FX. Add a small amount of noise to any mix, and it will give the overall sound a more “analog” character. For songs that have a fade at the end, activate the noise gate to fade out the noise automatically, avoiding any unwanted noise tails.

Crosstalk also plays an important role in re-creating the sound of an analog mixer. Unlike other plug-ins that work on a single channel or bus insert and only provide crosstalk between left and right signals, the crosstalk generated in CTC-1 spills over naturally into adjacent channels, with decreasing amounts the further away a channel is from the source. Implementing this feature required delving deep into the DAW mix engine and required extensive research and development but the result is completely new and revolutionary.

Every analog console or summing mixer has a unique sonic signature that makes it recognizable in the mix. CTC-1 not only captures the unique character of the consoles modeled, it allows you to easily increase this character by a variable amount, which is like running the signal through the same console multiple times.

Adding high amounts of Drive to the signal can result in extreme gain offsets inside the console, which could have a negative impact on subsequent plug-ins by offsetting dynamics threshold levels or creating distortion. CTC-1 is equipped with special gain compensation algorithms to avoid this effect. Two settings are available: With the Bus setting, master gain compensation is applied inside the bus in which CTC-1 is inserted, before any bus insert effects; with the Channel setting, individual gain compensation is applied in each channel routed into the bus.

Since CTC-1 is a Mix Engine FX plug-in, and processing is applied to many sources individually, CPU load could get out of control, especially when working on a large project with many channels. Here, ECO mode comes to the rescue, reducing processing by using simplified algorithms with less attention to the nonlinearity in the signals. 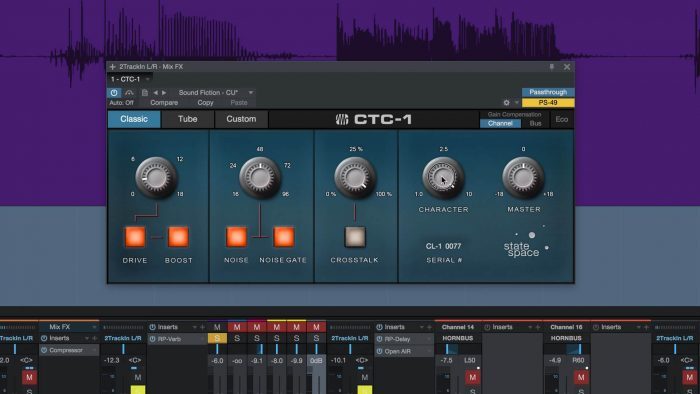 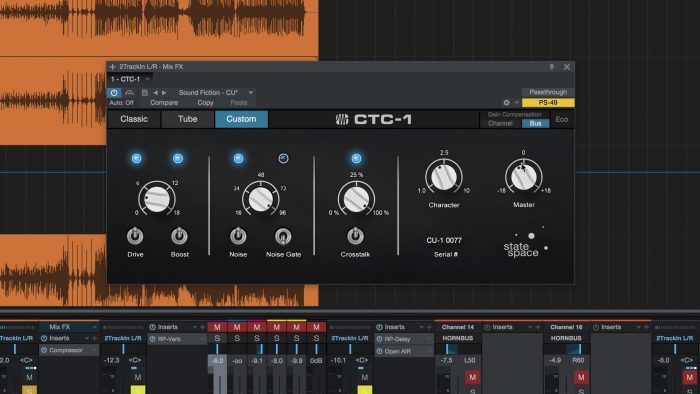 Save 50% off Image-Line synthesizer & effect plugins