PreSonus has announced its new series of StudioLive AI hardware/software digital mixing and recording systems, each with Active Integration technology.

StudioLive AI-series mixers retain the same surface-driven functionality that made StudioLive mixers famous, while adding even more processing power, enhanced workflow features, and Active Integration technology. Like the original StudioLive series, they’re incredibly intuitive and easy to learn and use. 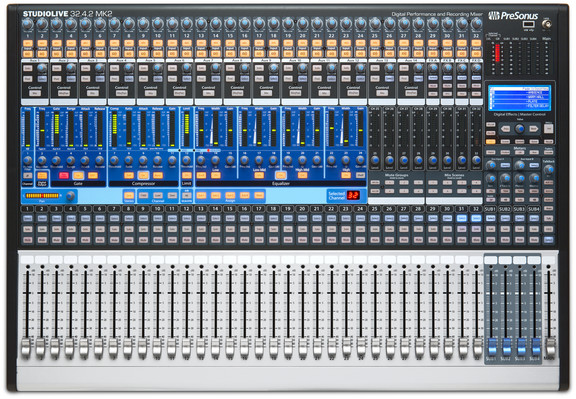 Unrivaled sound quality is provided by premium Burr-Brown A/D/A converters and new DSP architecture based on the acclaimed 64-bit Studio One® audio engine. Robust DSP performance, direct Wi-Fi and LAN communication, fast and intuitive workflow, an onboard FireWire s800 interface, and a tightly integrated software suite for Mac®, Windows®, and iOS® create a streamlined working environment for both live and studio use.

Redesigned from the ground up, these state-of-the-art mixers provide analog workflow with extensive dual signal processing on every channel and bus and actively integrated software that solves real-world problems and lets you record and distribute what you mix. All signal processing-Fat Channel processing, reverb and delay effects, graphic EQs, the works – is available on all channels and buses at all times. Configurable networking and communications option cards ensure your investment won’t be outdated as new technologies emerge.

Active Integration is the difference

PreSonus Active Integration (AI) is a complete, networked, tightly integrated hardware/software ecosystem in which every touch point in the system communicates to enhance the user experience and solve practical problems in ways not previously possible.

In StudioLive AI-series digital mixers, Active Integration technology provides wireless or wired (Ethernet) remote control over nearly every feature, thanks to tight integration with the newly redesigned PreSonus StudioLive AI Software Library for Mac®, Windows®, and iOS®, which is included free with StudioLive AI-series mixers. The new mixers sport a FireWire s800 interface and an Ethernet control port on an upgradeable card that can be swapped for optional Dante, AVB, or Thunderbolt.

Thanks to Active Integration, StudioLive AI-series digital mixers deliver an extended feature set, including twice as many internal effects buses as first-generation StudioLive mixers (two reverbs and two delays on dedicated buses), the ability to create two complete sets of parametric EQ and dynamics-processor settings for each channel and bus and make quick A/B comparisons at the touch of a button, and more.

In addition, StudioLive Remote-AI control software for iPad® and QMix™-AI aux-mix control for iPhone®/iPod® touch will be available free from the Apple App Store.

All of these applications are designed to communicate with each other and with the mixer. For example, channel names entered in SL Remote-AI are broadcast throughout the network (including Capture), so you only have to name a channel once-and you can name it from anywhere, including the StudioLive AI mixer.

Last and far from least, PreSonus’ award-winning Studio One® DAW has been updated to version 2.6. In addition to the aforementioned ability to import StudioLive AI scenes from Capture 2.1 and apply the scene to its own mixer and new Fat Channel plug-in that can share presets with VSL-AI, version 2.6 adds Nimbit® and SoundCloud™ dashboards to the Start page, extended hardware-controller support, major metronome enhancements, and much more.