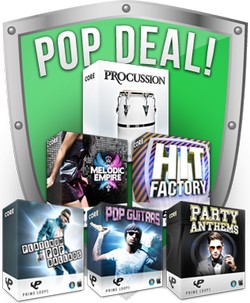 Looking for that extra sparkle to blast your tracks into the Platinum Pop Club!? Dig through the gems in this glimmering Pop booty! Our latest trove of Pop treasure is the massive ‘Pop Producer’ Bundle Deal, all you need and more to make that next smash hit!

Prime Loops launches Lo-Fi Bundle and Afro Bundle at up to...