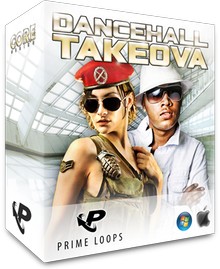 The unmistakable sound of Jamaican music has come a long way since the days of Bob Marley and Peter Tosh. Nowadays this iconic island’s music scene is sizzling with digital energy – incorporating electronic pop, dance and rave sounds from around the globe. With this unique blend of sound now feeding back into the clubs in the Americas, Europe and Asia, there’s no doubt about it: it‘s a Dancehall Takeova!

From the likes of Bounty Killer to Mavado, Sean Paul to Vybz Kartel or Major Lazer to Sean Kingston – modern dancehall music is pushing international pop music forward while itself evolving constantly to new sonic heights. With Dancehall Takeova, Prime Loops gives you a sound pack that is showcasing the absolute best and latest in the dancehall music.

Prime Loops has also launched a limited time sale on its sample packs.

Prime Loops are offering 50% off ALL Prime Loops, Samples and Presets, giving customers the chance to get their hands on our latest and greatest Prime Loops packs at a margin of the price.