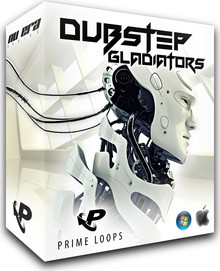 Calling all contenders for future Dubstep success – power on for “Dubstep Gladiators”, the heavyweight new sample pack from sound emperors Prime Loops! Containing a super-charged array of bass, synth, SFX and drum loops, this sound library has all the precision and flawless execution to beat the opposition into oblivion!

Kit out your army of sonic warriors with every loop included in “Dubstep Gladiators”, specially produced and ready for action at an unrelenting 140BPM. Select your weapons from over 60 full and solo drum loops, the thunderous rhythm that’ll shake the competition to the core. Realise your tactical genius with 45+ wobbling basslines, thick enough to crush brick walls with ease. Over 20 synth loops and chord progressions provide the final vehicles to your victory and will slice through your mix with disenchanted Dubstep intensity!

All of this restless energy is contained within 7 easy to navigate folders. Weighing in at over 380MB, this pack is ready to be plundered and the spoils dropped straight in to your mix . Of course, these sounds come to you totally royalty free so you can reign at the top without ever having to look back.

The sample pack is available to purchase for £17.95 GBP.