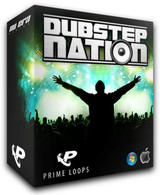 This full-on sample pack has been created and maximised to the highest standards and is brought to you by Prime Loops, the top UK Sample Providers in the scene today!

Dubstep Nation is available to purchase for £29.95 GBP.