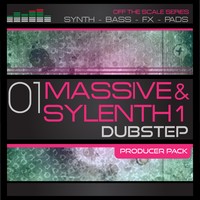 Producer Pack has announced Massive & Sylenth 01 – Dubstep, the first in the new “Off the Scale” series of soundsets.

This series uses exclusive presets/patches designed to be used within your latest version of NI MASSIVE & SYLENTH1. Each of the presets have been meticulously designed specifically for this genre, and has been developed by highly experienced and professional sound engineer/producer ‘DIRT CHEAP’ renowned for his many BEATPORT top 10 tracks.

You will also find within this pack MIDI files containing Dubstep drum patterns which you can use within your compositions 100% copyright Free.

Full Macro controls have been assigned to many of the Massive presets inside for easy sound manipulation.

The soundset is available to purchase for £9.95 GBP.