Producer Pack has announced the release of the #UKG Bundle by Jeremy Sylvester, the worlds biggest UK Garage sample pack. 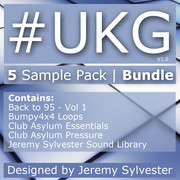 UK Garage is making a huge comeback in 2012, some say UK Garage never died in the first place and has always been there. Old skool UKG producers such as Jeremy Sylvester, Todd Edwards and Mike Delinquent have consistently produced the music over the years still adopting its original roots yet keeping it current to today’s climate.

This fantastic new UKG bundle contains five of Jeremy Sylvester’s most popular sample packs, Back to 95 vol 1, Club Ayslum Essentials, Club Asylum Pressure, Producer Sound Library and Bumpy 4×4 loops all conveniently packaged in one bundle, knocking 40% off the overall price. The pack is absolutely huge weighing in at over 1.61 GB of everything you’ll ever need to make banging, upfront UK Garage, Deep House, Classic House, Deep Tech and more.

The #UKG Bundle by Jeremy Sylvester is available to purchase for £59.95 GBP.