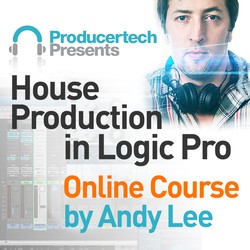 Producertech has introduced Dale Anderson creates Classic House in Logic and House Production in Logic Pro by Andy Lee, two additions to its range of online courses, both of which uncover the secrets behind producing professional-quality house music with Apple’s Logic Pro digital audio workstation.

The most recent Producertech online courses are by none other than Dale Anderson, one of the leading figures in the house scene for over a decade, and one of the most prolific and award-winning in-house contributors to the Loopmasters sample pack range, Andy Lee.

Both sets of tutorials show a whole host of techniques for how to produce house with Logic Pro, from the initial beat construction right through to the creation of a final, professional-sounding mastered mix. 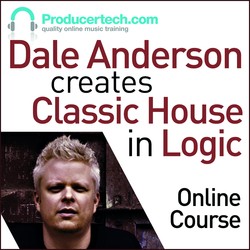 Dale Anderson’s course provides a step-by-step guide to producing the classic anthem ‘Makes Me Feel’, which was a hit deep house record originally made with Anil Chawla that received support from pro DJs such as Nic Fanciulli, Roger Sanchez and Danny Tenaglia.

Accompanying the tutorials are download packs containing the Logic Projects created in the lessons, along with large bonus packs of 200MB of extra loops and hits, for making a variety of different genres of house.

The courses are now available to purchase at Loopmasters.