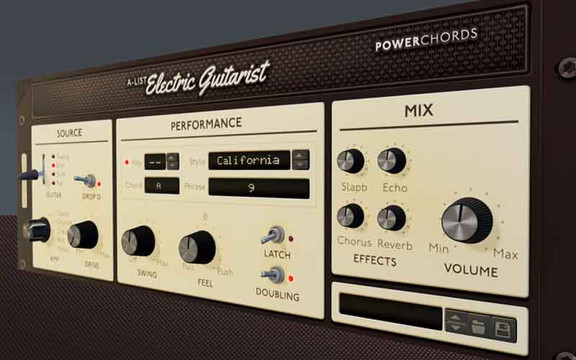 “Whether you’re creating pop, rock, punk or other styles of music, A-List Electric Guitarist helps you quickly and easily create great-sounding power chord tracks and explore new musical directions,” stated Timothy Self, Propellerhead VP of Product Marketing. “With A-List Electric Guitarist Power Chords, you don’t need to be a virtuoso to get amazing results; one finger is all your need.”

Propellerhead launched the A-List series in May 2014 with the introduction of A-List Acoustic Guitarist, which has since emerged as one of the most popular Rack Extension instruments in the Propellerhead store. The release of A-List Electric Guitarist Power Chords expands the line further, with more great-sounding A-List instruments to come.

Since its release in 2012, Propellerhead’s Rack Extension platform has emerged as a powerful audio plug-in format, with over 600 active developers and more than 200 instruments and effects now available via the Propellerhead online store. Rack Extensions integrate seamlessly into the Reason rack, combining excellent sound, smooth workflows and rock-solid stability with the intuitive routing, automation, deep editing and flexibility that Reason users expect.