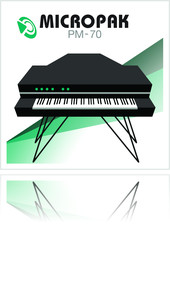 At the core, the CP-70 is a piano with strings and hammers with a pickup system for electric amplification. Originally released in the 1970’s as a “portable grand piano” for use on rock tours, the sound was made famous by Genesis, Kansas, U2 and more recently Keane. The CP-70 can be compared to that of a Rhodes or Wurlitzer electric piano, but due to the use of strings instead of tines, it sounds much more like a traditional piano. The metallic strings amplified by electric pickups further characterize the CP70 as its own class of piano, giving it a guitar-like sound at times.

Puremagnetik worked with The Distillery in New York City to capture the pickup details using a prototype germanium-based DI from Sage Electronics. The twangy saloon like piano tone was recorded with a stereo pair of matched 414’s through a Focusrite ISA 828.

Additionally, Puremagnetik has programmed some patches to emulate the CP-70 tremolo circuit and tube amplifier. As evidenced in some of the more exploratory patches, PM-70 also explores the piano as a spectral source to create new fictional synthesizer tones.