Plugin Boutique has launched a flash sale on the Retro Keys instrument by BeatSkillz, a rompler inspired by ’80s soundtracks for films and TV series, as well as Pop music. 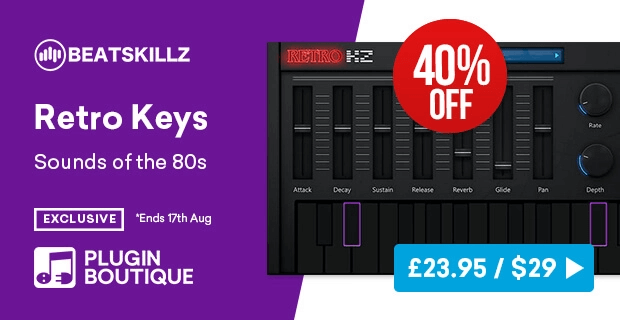 The sounds of Retro Keys were sampled from original 80s synths and samplers, using high outboard gear for maximum fidelity.

Have you seen TV, Netflix, and closely listened to the scores of many contemporary movies today? If yes, then you can’t miss the fact the 80s/ 90s Sound is back BIG TIME!

We wanted to pay homage to the sounds of the great soundtracks from the 80s from composers and tv series /movies such as John Carpenter, Harold Faltermeyer, Jan Hammer, Michael Jackson, Prince, Night Rider, The Terminator, Commando etc..

Certain iconic sounds showed up in many such projects, and we decided to embark on the journey of bringing you the very sounds you know, sounds you can identify immediately as soon as you hear them!