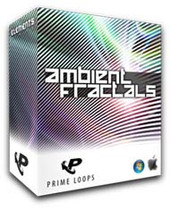 Engineered to capture the true essence of ambience, “Ambient Fractals” will twist you through the mathematics of sound, bringing you a mesmerizing selection of waveform manipulations and spaced out oscillations from the sublime side of synthesis. It’s never been easier to find that extra layer of texture for your tunes and soundtracks, adding depth, tension and mystery to any mixdown.

The library includes nearly 300 samples and loops which Dmitry created with a number of hardware synthesizers, including the Waldorf Q, Access Virus, Roland JP8000, Korg Prophecy and Clavia Nord.

The focus of this library is on single shot sound fx samples. A total of 276 sounds are categorized in 15 folders, including things like Atmos, Glides, LFOs, Reverses, and Weirdos. Other than being serially numbered the actual samples within the folders do not have any additional descriptions. I prefer a more distinctive naming convention but since there is a reasonably small amount of samples in each folder it isn’t too big a deal. Unfortunately there is no info on which key samples are in.

While a number of one shot samples are short sounds (e.g. stabs, perc, blips) most are actually quite long, from several seconds up to nearly half a minute.

Have a listen to the product demo below to get an idea of the type of sounds included in Ambient Fractals.

Note: the audio demo includes some additional sounds not included in this library (e.g. the drum beat).

Let’s take a look at the one shot samples in detail.

Besides the one shot sounds you also get a collection of 20 loops, ranging from 90 to 130 bpm. These are in the same vein as the single sounds. These noisy, glitchy, heavily processed tonal and atonal sounds do have some more descriptive names indicating bpm, and key info where relevant.

First off, the title might suggest otherwise but I don’t think Ambient Fractals is geared towards ambient music per se. It’s more of a sound fx collection, including tons of well produced sounds that are great for cinematic work, experimental music and to spice up any type of electronic music really.

The whole production has a bit of a dark undertone, which makes it great for science fiction or thriller type music/soundtracks.
If I had to come up with a title for this sample pack I would make sure it would have “space” or “alien” in it.

While having a good variety of sounds, many samples in Ambient Fractals are heavily processed with reverb, delay and other effects. Now much of the processing is what makes the samples unique so I am not saying this is a bad thing, but it obviously comes at the cost of usability. That said, the samples do sound simply great.

In short, Ambient Fractals includes a wealth of high quality sound fx for adding some zing to your productions.

Prime Loops is offering a free demo pack featuring 20 samples and loops so check it out and see what you think.