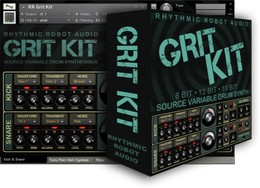 The difference that Grit Kit brings to this process is that every wave within the instrument has been recorded through the circuitry of three different vintage hardware samplers: the 8-bit Ensoniq Mirage, the 12-bit Akai S950, and the 13-bit Ensoniq EPS. These waves have been recorded over and over again using different settings of the source samplers, and pushing the input circuitry of those samplers harder and harder, allowing the user to dial in exactly as much hardware character as they want for their sound.

The Grit Kit library is available to purchase for £34.95 GBP.