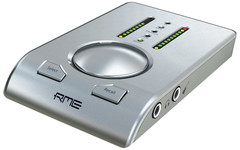 RME has released a silver edition of the Babyface, a 22-channel, 192kHz bus-powered audio interface.

RME has given a face to digital audio. Starting with the Multiface as first serious/professional mobile I/O solution ever we raised the bar further and further, up to the extremely popular and successful Fireface series. So now that the racks are filled we will start to rock your desktop!

The Babyface is smooth on the outside for looks and feel, but has the balls inside: latest 192 kHz AD- and DA-converters, two reference class microphone preamps, SteadyClock – analog circuit design, features and function are truly RME – we wouldn’t give our newborn anything second class!

That includes the new TotalMix FX, a TotalMix on steroids, with tons of new features, improvements and 3-band parametric EQs, plus added echo and reverb: anything you need right out of the box and with near zero latency!

The Babyface uses RME’s Hammerfall USB audio core from the Fireface UC – another milestone in low latency audio interfaces, and will give you outstanding performance and top sound in an ultra-portable, nicely designed and attractively shaped enclosure.