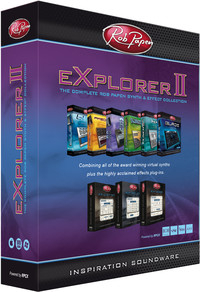 eXplorer 2 includes Blue 1.9, Predator 1.5, the all new Blase additive synthesiser, the extremely powerful and flexible drum machine Punch, SubBoomBass bass synth, RP distort, RP Delay and RP Verb 1.5. Create edgy and modern sounds in your productions thanks to the thousands of rich and complex and track-ready presets included, created by Rob Papen, and many guest artists such as the legendary Noisia.

The eXplorer 2 bundle will be available May 30th, 2012. Upgrade info will follow.