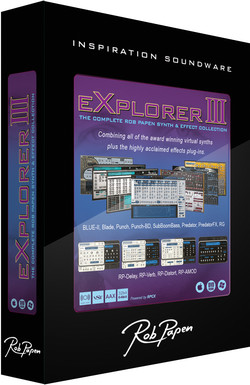 Rob Papen has launched eXplorer III, an upgrade to the bundle of virtual instruments and effects by Rob Papen.

Rob Papen is one of the world´s leading sound designers and over the last few years he has released a series of multi-award winning high quality software plug-ins which have become essential tools for many of the world´s leading music producers. Now you can purchase the whole Rob Papen collection in one single package – eXplorer 3.

Since eXplorer was first released in 2011, it has been updated to include Punch, Blade and now Blue 2, RP-AMOD and Predator FX at no extra cost, so now more than ever eXplorer 3 represents fantastic value for money!

The bundle is available for Windows and Mac (VST/AU/AAX), priced at 585 EUR (incl. VAT) / $699 USD. Owners of previous eXplorer bundles can upgrade by logging into their Rob Papen account.