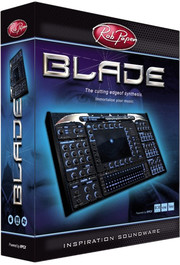 Rob Papen has updated its Blade virtual synthesizer for Windows and Mac to version 1.0.0b.

At the heart of BLADE, ready to twist and transform your musical mind, lies the Harmolator. An additive synthesis system, which rather than using the system of changing additive partials, uses global controls which capture the essence of additive synth in an intuitive way making the creation of sounds much easier than using other additive synths.