Roland U.S. has announced the 2011 V-Drums® National Championship, its second annual competition to find the top drummer in the United States. 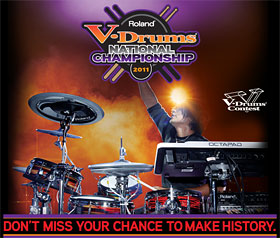 The V-Drums National Championship gives drummers throughout the U.S. the chance to make history by competing at the local, regional, and national levels with solo drum performances on the TD-20SX V-Pro® Series V-Drums. Along the way, contestants can win professional percussion gear and swag, with the champion drummer earning the opportunity to represent the U.S. at the V-Drums World Championship in January 2012, at the Winter NAMM Show.

Players start by submitting a digital audition, via YouTube™, to qualify for one of more than 30 preliminary competitions to be held at local music retailers throughout the country from June 23rd-30th. Winners at the prelims will go on to compete at eight regional semi-finals on July 28th, with the top players moving on to the national finals on August 25th at Sam Ash, in Las Vegas.

Prizes throughout the various rounds will include, but not limited to, a TD-20SX drum set, RMP-5 Rhythm Coach® and stand, a TD-9KX2, a set of custom REMO shell wraps, Drum Workshop hardware, and subscriptions to DRUM! magazine.

The finals event will host an array of live performances by top drumming artists and celebrity professional drummers as the guest judges.

Roland U.S. will evaluate the digital auditions and select preliminary round qualifiers based on musicianship, stage presence, and the creative use of technology in their drum performances.

Digital auditions are being taken now through June 7th, 2011.