Roland has announced its Roland Boutique series, a new, limited-edition line of compact sound modules that recreate renowned analog synthesizers from the company’s historic past. 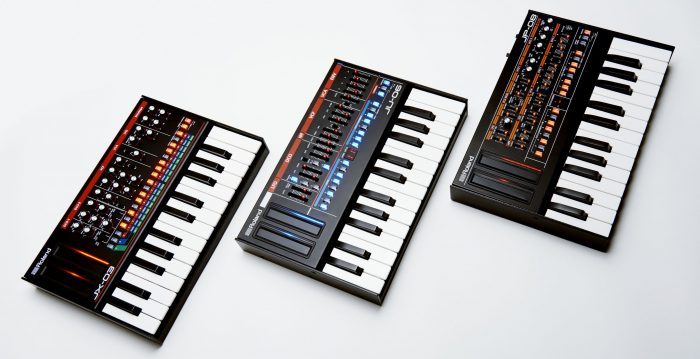 Powered by Roland’s Analog Circuit Behavior (ACB) technology, the series includes three modules based on the JUPITER-8, JUNO-106 and JX-3P instruments from the 1980s. Armed with a full complement of hands-on controls derived from the original synths, each sound module can be used as a tabletop MIDI device or mounted in the companion K-25m Keyboard Unit to create a standalone compact synth.

The Roland Boutique series faithfully captures the legendary sound and response of classic Roland analog synths for modern electronic musicians. Using the proprietary ACB modeling that was first developed for instruments in the AIRA line such as the TR-8 and SYSTEM-1, the essence of the original instruments is recreated in every detail, right down to the analog component level.

Each Roland Boutique module is no bigger than a book and can run on USB bus power or batteries, providing grab-and-go versatility for computer music production and live playing. The modules also include built-in speakers, a convenient feature for monitoring the sound in mobile environments.

With the JP-08, the legendary JUPITER-8 synth is back in a compact and powerful package. Featuring 36 knobs and sliders from the original JUPITER-8 front panel, the four-voice JP-08 is highly programmable and encourages sonic experimentation. The JP-08 faithfully reproduces the original JUPITER-8 sounds and adds a few new twists in the form of extra LFOs and expanded VCO range.

Often described as one of the last great synths of the analog era, the JUNO-106 became a favorite thanks to its warm sounds and instant sound-shaping ability. The four-voice JU-06 module continues this approach, with 23 parameters controllable via the front panel and classic JUNO sound, complete with the original’s signature chorus effect. New enhancements include a faster LFO and continuously variable high-pass filter.

The JX-03 module continues the legacy of the dual-oscillator JX-3P synth. While the original featured a button-driven interface for immediate access to preset sounds, it was highly programmable when paired with the optional PG-200 controller. The four-voice JX-03 inherits all 24 knobs from the PG-200, plus the distinctive JX-3P tonal character. Added extras not present in the original synth include new waveforms, expanded DCO range, and cross-modulation options.

In addition to their unique ACB sound engines and model-specific controls, each Roland Boutique module is equipped with dual ribbon controllers and a built-in step sequencer. With their USB and MIDI I/O connectors, the modules can easily integrate with studio setups and other MIDI keyboards. Each module also features a chain mode that allows the user to connect two or more modules of the same type to increase the available polyphony as needed. 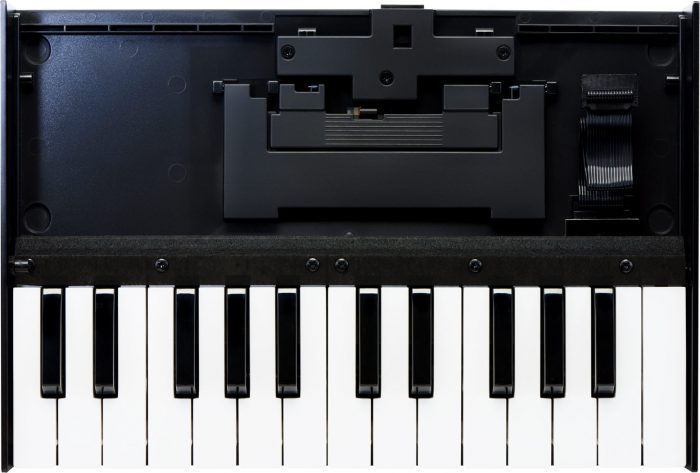 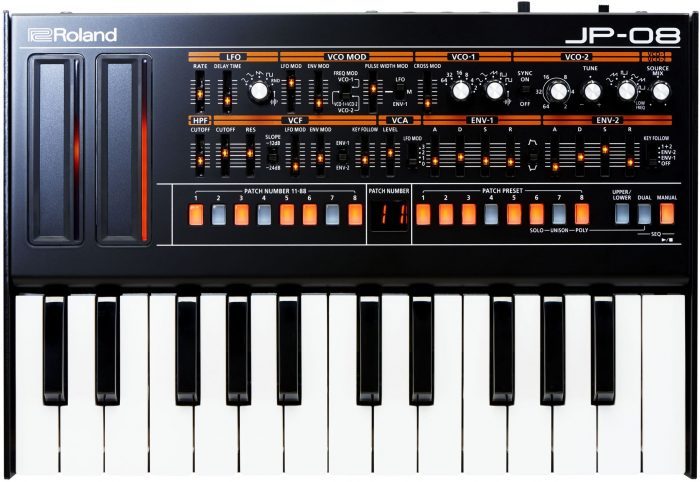 With the optional K-25m Keyboard Unit, users have the ability to turn a Roland Boutique module into a compact, all-in-one synth with 25 velocity-sensitive keys. Each module mounts in the K-25m quickly and easily, and can be interchanged with another in no time. Once in the K-25m, the module can be mounted flat or angled in two different positions for easier access to the panel controls.

Pricing and availability to be announced.