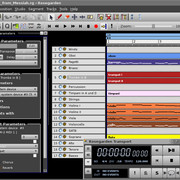 The Rosegarden team has announced the release of version 11.11 of Rosegarden, an audio and MIDI sequencer and musical notation editor for Linux.

A long time in the making, this release combines a number of bug fixes with two major sub-projects that happened to come together right at the same time, and several completely new features as well. It is probably our most substantial offering since the landmark 10.02.

Rosegarden is available to download as source code and binary packages for many major Linux distributions.