The Rosegarden team has announced the release of version 11.02 of Rosegarden, an audio and MIDI sequencer and musical notation editor for Linux. 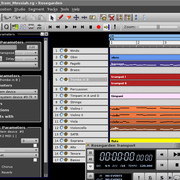 This is a bug fix release that addresses a few of those annoying problems that hang around for the longest time, because they are rather complicated to fix. The most notable of these is that nine years after the first complaints, we have FINALLY found some sensible way to handle tied notes in the matrix and notation editors. We really painted ourselves into a corner with our design, and we scratched our heads for years just trying to come up with some plan of attack for this one. In the end, what we did was address the problem by modifying the behavior of selections to treat chains of tied notes as an unbreakable whole, instead of as separate links in an easily broken chain. This behavior is quite different, but it seems to be working rather well.

Rosegarden is available as source code, as well as installable binary packages for many major Linux distributions.