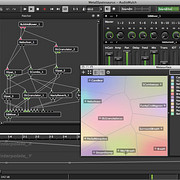 Ross Bencina has released version 2.0.2 of AudioMulch, an interactive musician’s environment for PC and Mac.

This version includes usability improvements and bug fixes. Improvements have been made to Audio/MIDI synchronisation on Mac and to stability on OSX 10.4 (Tiger). Mac VST scanning has been improved to avoid start-up freezes when VST plugins prompt for activation. Cut/Copy/Paste can now be used when renaming Contraptions.