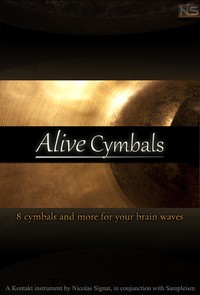 Sampleism has announced the release of Alive Cymbals, the first in the new series of ‘Alive’ instruments for Kontakt, developed by sound designer and composer Nicolas Signat.

Alive Cymbals has been created from a set of 8 cymbals recorded with Audio Technica mics and Nagra LB recorders and preamps in 88,2kHz 24 bit, edited in the same resolution and then down sampled into 44,1kHz 24 bit with Izotope SRC.

Recorded in a warm room in stereo (close position), the sound is raw, vibrant, accurate, and extremely musical.

The Alive Cymbals library for Kontakt (full version required) is available for the introductory price of £10.99 GBP.