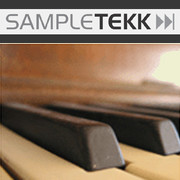 The SampleTekk acoustic piano libraries are available at 25% discount until February 18th, 2011.

This sale might be until the 28th, it’s still available today…