Producertech has launched a Flash Sale on selected Techno and House Courses, offering a 40% discount on tutorials from Ian Bland, Paul Maddox and OC & Verde. 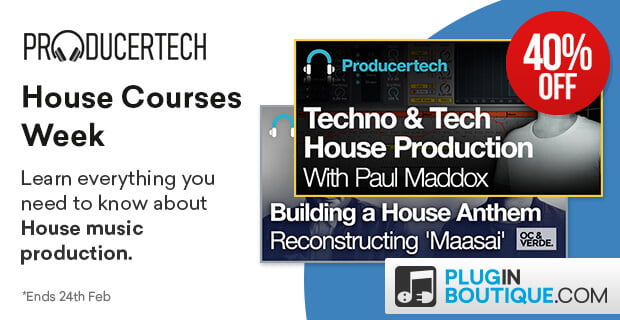 The following courses are on sale:

Building a House Anthem – Reconstructing ‘Maasai’ — Called ‘New Names to Watch’ by Pete Tong earlier in the year, OC & Verde have become firmly in the limelight of the House scene, with their recent productions smashing the charts and receiving praise and support from a long list of A-list DJs. In this set of tutorials, the pair reconstruct one of their best known tracks, ‘Maasai’, which spent several weeks at number 1 on Beatport and lead to a host of DJ gigs around the world.

Tribal and Tech House Production in Live — With almost thirty years in the UK’s dance music scene, Ian Bland a.k.a Blandy has an incredible wealth of knowledge in all things music and production. Blandy, who now owns Maison Records which releases House and Prog-House bangers, is here to take you through the production of a huge tribal/tech-house track in this superb course that spans almost four hours.

Techno and Tech House Production in Live by Paul Maddox — This course is a must-see for anyone wanting to learn the secrets of tech house or techno production. The lessons provide a thorough, in-depth guide to constructing a banging dancefloor filler, from one of the most respected producers of the last decade, Paul Maddox.

The sale is available at Loopmasters and Plugin Boutique through February 24th, 2019.

SoundSpot launches Velo2 limiter plugin at up to 97% intro discount