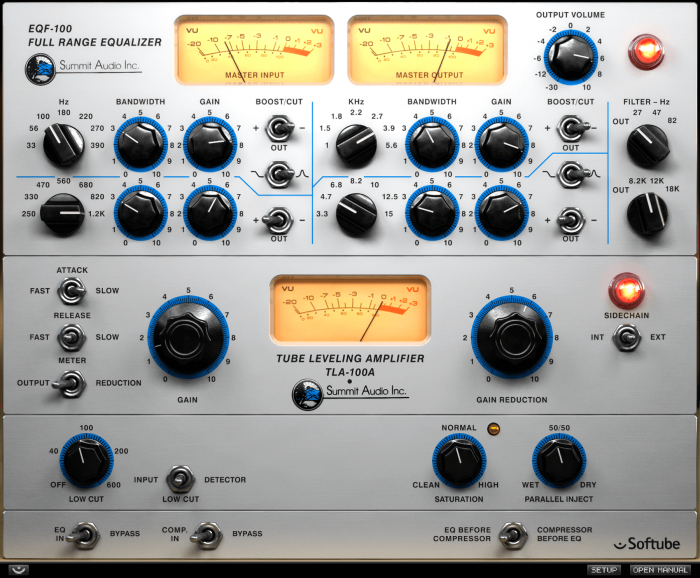 Combining the smooth operating EQF-100 parametric passive equalizer with the mild but authoritative TLA-100A compressor, Summit Audio Grand Channel is a highly versatile channel strip that will cover a large part of your mixing needs.

The Grand Channel combines the warm and smooth tone sculpting Summit Audio EQF-100 Full Range Equalizer with the rich sounding and dead-easy-to-use Summit Audio TLA-100A Compressor. Having the two combined in a single plug-in makes adjustments easier, as you will often find that the compressor affects the equalizer and vice versa. By default, the sound reaches the equalizer before the compressor, but you can easily reverse the order with a single switch.

Based on the greatest classics of American mixing console hardware, the American Class A channel strip is fast and easy to work with, and brings a truckload of character to the party.

With a shape section featuring gate and transient designing, a stellar four-band EQ with proportional Q and range control, a fascinating compressor design which can be switched between feedback and feedforward operations, and a warm, crunchy output drive section, no modern studio is complete until this sonic option is at hand.

Both channel strips are available for Windows and Mac in VST/VST3, AU and AAX plugin formats, as well as for Console 1.