Why does the shower curtain move toward the water? David Schmidt, an assistant professor at the University of Massachusetts Amherst, came up with an explanation. 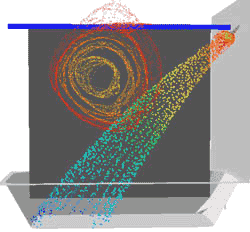 Maybe it happened to you this morning: you entered the shower and the curtain moved in to engulf you. I have recently discovered a new explanation for this common phenomenon, thanks to modern fluid-simulation technology.

According to David, a low-pressure region –created as a result of a spray driven vortex— is what pulls the shower curtain in.

The best way to keep the curtain from sucking in is to sew weights in the bottom or use a thicker/heavier curtain (because the force is pretty weak it will hold the curtain in place).