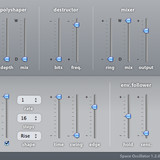 Sinevibes has released version 1.2.0 of Space Oscillator, an audio-controlled synthesizer plug-in for Mac.

Space Oscillator is a unique combination of a synthesizer and a sound processor.

At it’s core, it has a unison oscillator with a spacious stereo sound, which is modulated by input signal envelope follower or a complex step sequencer. The oscillator is then fed into a polyphonic waveshaper, decimator and can be ring-modulated with the input signal. With such an experimental generation and effect chain, Space Oscillator allows you to create new sonic textures with a lot of original character and attitude: from organic synth and bass lines, old-school game boy sounds to rhythmic zaps and noises, extreme lo-fi glitches and much more.

Space Oscillator for Mac (AU) is available for to purchase for $29 USD until the end of 2010 (regular price $39 USD). The update is free to all existing owners.