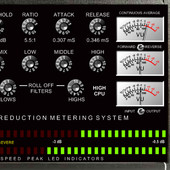 It offers Continuous Average Reduction VU Meters in addition to Peak LED Meters ranging from –0.5 dB to –180 dB. The third VU Meter is an Input/Output Comparator to ensure the proper levels.

Little Black Box Series II (M) brings forth the highest CPU drainage (8.5% on a single-core Pentium 4, 2.8 GHZ) out of the three compressors offered hence, the “HIGH CPU” stamp embroidered on its faceplate.

Detailed specifications co-inside with Little Black Box Series II with the exception of what is stated above.

Little Black Box Series II (M) is the last compressor I am offering. I will focus only on Equalisers and, Pre-amplifiers from this day forward.