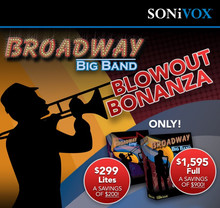 Fable Sounds’ Broadway Big Band is an unprecedented and innovative virtual instrument. Up to now, it has been relatively impossible to simulate non-orchestral brass and woodwind instruments with the degree of clarity and depth which the music they produce demands. But Broadway Big Band changes everything… Now is your chance to experience the benchmark in modern brass and woodwinds virtual instruments at an unbeatable price!

Act now to take advantage of these fantastic prices on these incredible virtual instruments.