Plugin Boutique has launched an exclusive sale on TimewARP 2600, offering a 70% discount on the emulation of the ARP 2600 synthesizer instrument. 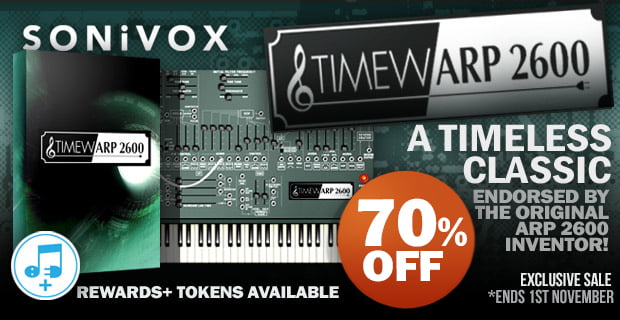 For nearly 4 decades, the ARP 2600 has helped to provide the backbone for electronic, urban, and popular music. Today, musicians and producers aggressively pursue the limited number of remaining ARP 2600 synthesizers for their distinctive warmth and unmatched fidelity.

The TimewARP 2600 delivers the same fat sound with twice the flexibility; at a fraction of the price of the original. This is one synth that you can’t afford to be without.

By developing their own proprietary and optimized virtual analog oscillators and filters, WOW brings the most accurate digital reproduction of the 2600’s fat analog sound to your desktop. All of the original control features from the ARP 2600 are there, and because you can now save your carefully programmed patches, the TimewARP 2600 is even better than the real thing!

The ARP 2600 synthesizer helped define the music of an era. Edgar Winter’s “Frankenstein,” The Who’s “Who Are You,” The Tubes, Jean Michel Jarre, Deep Purple, and on and on. Only 3,000 ARP 2600’s were produced between 1970 and 1981, and they’ve been trading hands among collectors for thousands of dollars ever since.

TimewARP 2600 is available for Windows and Mac (VST/AU/RTAS).

Dangerous Music tips: Why use an analog summing mixer? with Ryan West