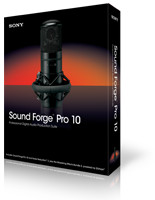 Sound Forge for Windows PC is available to purchase starting at $374.95 USD.