Sound Magic has announced the release of Supreme Drums, a new virtual drum instrument for Windows. 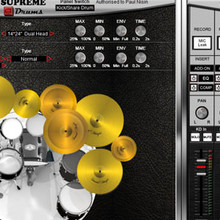 Supreme Drums starts with the familiar drum sounds featured in many great hits such as The Eagles’ Hotel California, Michael Jackson’s Thriller and many more.

We have created a powerful drum set-up with 19 available pieces and over 10 different kits. To ensure the best possible authentic sounds, Sound Magic not only chose the best drum brands available for sampling (such as DW, Ludwig and Sonar) but also utilized the best recording studios in the world to record them.

It took more than two years to arrange for these samples to be created at three of the best known studios of all time: OCEAN WAY RECORDING(The Rolling Stones, Eric Clapton and more). THE RECORD PLANT (The Eagles Hotel California, Michael Jackson, Nine Inch Nails and more) THE LEGENDARY ABBEY ROAD STUDIOS (The Beatles and many more) to ensure the highest possible sound quality, we used the best possible gear, including the legendary Neve 88R and SSL 9080J consoles and dCS 905 AD converters.