Sound Performance Lab has announced the release of Passeq, a new equalizer effect plug-in in the Analog Code series. 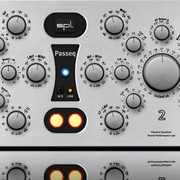 With their new Passeq plug-in SPL promises to have faithfully translated into the digital domain the sound and response of passive EQs. The new Analog Code is said to have the most complex algorithms SPL developers have ever conceived to date.

Just like its analog counterpart, the Passeq plug-in provides the most dense network of passive filters ever in one single unit: each channel has 72 filters on three bands. According to SPL, the programming takes into account all interactions between filters and, at the same time, emulates the sound of the input and output transformers. The plug-in includes two display options: the standard two-channel interface and a space-saving single-channel version. One of the plug-in’s highlights is the switchable M/S mode that allows independent processing of mid and side signals.